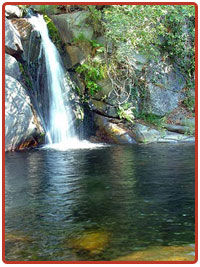 To visit Adrada is to have the privilege of knowing both Tiétar valley as the Sierra de Gredos, which gives it great landscape and environmental diversity that results in extraordinary wealth, with many well preserved habitats (oaks, riparian forests, pine, chestnut, broom ..) inhabited by some of the jewels of the Iberian fauna.

This strategic location has a privileged climate, very tempered by the valley lies at an average altitude of around 600 m and protected by the Sierra de Gredos in the cold north winds.

The area offers to the visitors a big range of options for all tastes, from historic buildings to visit,to do air sports (horse riding, cycling, quad biking, paragliding), lost bysaw on

lrelaxing walks or more complicated or take as a starting point for other areas of the valley and the mountains.

Of course ,when we visit Adrada , we have to taste typical local dishes, based on traditional Avila kitchen characterized by the quality and authenticity of its ingredients: Jewish Boat Ávilacon sausage, trout streams of the Sierra Gredos, delicious goat cheese Adrada made artisanal way, buns typical San Blas, delicious ” revolconas potatoes “, without forgetting the classic and exquisite ribeye cochifrito from Ávila . Restaurants and places inns make much effort to provide all visitors a good taste to enjoy.

One of the best things to do to reach the village is a walk for it.. The EDIFICIO REYES is located in “El Torrejón” classic neighborhood of the village and from which has an enviable view of the town and the mountains. If we go downstairs about 50m. we ´ll arrive directly to the Town Hall. At the heart of it lies a source nineteenth century that brings water directly from the mountains. But mostly the square is the center of the meetings, and to celebrate the diferente holidays and fairs and it permits to know the gastronomy taking the appetizer in nearby taverns.

From the main Square takes Long Street, the main thoroughfare for centuries the town where most of the noble houses of the town.

Another meeting place in the village is the ” Kidney Fountain “named for the way it has. Do not forget to drink water because it ensures Adrada back another time.

On this tour we will have seen a few monuments worth noting that the Church, the Chapel of Our Lady of the Ivy and Castle.

The possessions of the castle was going through different hands to reach the town hall in the late twentieth century. Since then ,it has been restored and has become the Historical Interpretation Centre Tiétar Valley.